Being one of the 17 journalist from Indonesia and Asia Pacific in the APJC program is truly an experience for me. I find all the sessions during this five-week-program is very useful for me to enhance my capacity as a journalist, especially in financial and business media.

It’s been two weeks now, still a half way to go before completing this program, yet I have gathered a lot of information and insights about journalism, economic issues, digital media, women empowerment, and leadership. Thanks to all the instructors who delivered all the material in a simple way so that we can absorb everything easily.

I’m looking forward for the fieldtrip next week in Canberra, Albury and Wodonga, where I will meet a wide range of people from different background. It’s very exciting to meet farmers in the outback of Australia, I hope I can learn more about the modern farming. I’d like to know how they manage the land: about water management system, choosing the most suitable crops, fertilizer, post-harvest techniques, packaging, also marketing.

As a financial reporter, I want to take as much advantages as possible from the “Inclusive Business and Economic Reporting Workshop” hosted by Nigel. The first session last week gave me new knowledge and insights about the power of numbers. I believe the second session will be as great as the first one.

However, having this fellowship in Melbourne is another excitement for me. It’s my first time staying overseas for quite a long time, living with new friends from all over Indonesia as well as Pacific Islands. We learn from each other. I had a great time at Melbourne with APJC. The lecturers were all fantastic, and I met some new journalists, reporters, presenters with many different excellent background and experiences.
We’re not only learning and sharing new journalism experiences with this fast world but we’re also helping each other to come up with solutions on how to solve an issue whether within our news room or just being a journalist and also being a female journalist with a lot of cultural barriers.
This is a blessing for me to learn about mobile journalism because I’m now more expose to the world to get my stories and being able to create my own audience and building up my network.
This training encourage me to go back to Vanuatu and create my own audience and being able to pass more information to rural population through mobile journalism. I’m so happy, now I’ve created our local newsletter blog Having to kick start my career as a broadcast journalist with the National Broadcasting Corporation of Papua New Guinea in Lae, Morobe Province was great.

What is more exciting is, Morobe is the biggest province with 9 districts and 33 local level government areas making it one of the fast-developing, growing and industrious province.

If you ask me, what it feels like when I started, I would simply sum it up in three words; challenging, busy and changing everday.

Working in a province like Morobe has really set the pace to develop my skills and experiences thus set a strong foundation in my career. Having travelled far and wide is like travelling the country, however what makes Morobe unique is its so rich in almost everything you wish to find. Media friends during the health consultative workshop in Lae

Morobe is set at a location which makes it a the central nerve of business, travel and other socio-economic activities that come with it. For now I can say, the lessons learnt are worth it and the experiences taught at invaluable.

It’s a previlege to have been an understudy with a wealth of experienced and well-learned media figures in the province and the country. 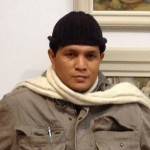 Perhaps part of me couldn’t really make the connection when I first read his profile distributed to us the fellows prior to the visit. APJC fellows listen in with interest as Yalmambirra tells his story.

Then we met Yalmambirra (http://athene.riv.csu.edu.au/~yalmambi/) who reflected on his culture, his choices in life and where his people currently stand in contemporary Australia.

It would be premature of me to make any snide remarks in relation to what I had heard from Yalmambirra about the treatment of his people by the government of Australia.

First; I have only been introduced to the world of the Wiradjuri people that Yalmambirra belonged to. Secondly; I prefer to speak only about what I had learned from the meeting on a personal level.

So as we arrived at the campus and made our way  to his whereabouts he walked us towards a meeting place in the bushes. I do not speak for the others who were part of this gathering but I felt some sense of familiarity to the surroundings and an usual emotion overwhelmed me completely.

Even now I cannot make any sense of what that emotion was but sitting there under the trees on a trunk that was purposely put there to serve as a seat was fantastically exciting. Yalmambirra is an Elder of the Wiradjuri people is the Koorie Academic (Wiradjuri) at the Charles Sturt University.

Whether that was because this was the second time that I would experience engaging in conversation with another group of people that called Australia their home I cant really say.

Yalmambirra said he left school when he was 10 years old refreshing information since he was 47 years old and was working towards his PhD with already two degrees under his belt. Where I come from those that leave school at that age have no place in Universities, no place or understanding in environmental sciences.

Where I come from children are constantly pestered into believing that without any proper or formal education they will never amount to anything. It is true to some degree. However with today’s phrases such as the sky is the limit, you are never too old to learn and the digital world fast making a mark in households across the world its true – there is nothing that could possibly stop anyone from returning to school to reach the potentials that they were gradually born into this world to live up to.

So this man who stood before us with his greying beard who told us that he didn’t believe in God and that his people couldn’t come together as one because of boundary conflicts – I realised that it only takes effort, a dream and goal to achieve more in this life than what many possibly think that we could amount to.

He spoke about his peoples culture. Living on their lands yet a legislation put in place restricted them from practicing the rituals or acts that  identified them as the Wiradjuri people. He told us of his elderly mentor that told him about an event that was suppose to happen. It is supposed to take place in central Australia where all clans would come together as one. Yet it was impossible for this to happen since there was still much conflict with other clans who where one peoples land starts and where the other ends.

As I listened on he told of how his people were known for many years as either flora or fauna to be classed as some kind of human, an animal or plan or sub human is disturbing enough to leave one questioning humanity.

Whether it ignited some familiarity to my own personal journey as a Samoan and a country that its people had to lose through death its people for independence and the right to run their own affairs I cant say.

What I learned however under those trees with a soft breeze swaying the trees peacefully and the birds singing in the background would take sometime to digest.

He said he was a speaker and teacher.  True to the meaning of both words. He spoke succinctly enough it was hard for me to miss his point. It was as concise as I wanted. What I learned from the very few hours we sat under those trees and listened and shared with Yalmambirra would perhaps be a lasting experience for me that I would constantly bring up to remind myself that despite all the conflicts in my life, personal or otherwise – I have an identity, I have a place called home, I am Samoan and that i recognised at the national and the international level as such. While not so far away from home this man who was so passionate about his heritage, culture, identity and country continues to fight to be recognised for who he is – a Wiradjuri http://en.wikipedia.org/wiki/Wiradjuri.

Both photos used in this piece were taken by Koroi Hawkins.

Koroi Hawkins is new to online Journalism and learning it is both exciting and scary for him.

I am Koroi Hawkins is a journalist with eight years of traditional media experience in the Solomon Islands.

This is my first video shot using online media techniques ie shot and uploaded from smartphones to youtube, blogged and tweeted. Hurray I am an online Journalist, I can get a job after all traditional media dies a natural and inevitable death!

Thanks APJC I am learning so much so fast, I feel truly liberated.

I am currently in Melbourne attending a five-week training program organized by the Asia Pacific Journalism Centre. I am a print journalist with the Post Courier newspaper in Papua New Guinea.